SilentNotes is a note taking app which respects your privacy. It doesn't collect personal data, runs free of ads and is an open source (FOSS) software. Write your notes in a comfortable WYSIWYG editor with basic formatting like headers or lists, and synchronize them end-to-end encrypted between Android and Windows devices.

For quite a while we have been working intensively behind the scenes on this version. SilentNotes is now based on ProseMirror, a very stable editor that opens up many possibilities for future developments (like undo, code highlighting, tables, etc). Many functions had to be re-implemented, but with this editor we were able to fix some older issues that seemed unsolvable before. Enjoy the new version!

The Windows application is available in the Microsoft store, the Android app can be downloaded from the Android play store, and both of them can be used for free. If you should have problems, questions or suggestions about SilentNotes, or if you simply find it useful, please send us an email to .

Installing from the store is the recommended way, experienced users also have the possibility to download SilentNotes directly from this site for sideloading.

Should you have found a problem with SilentNotes, you can create an issue on GitHub or just send us an email to the address mentioned above. 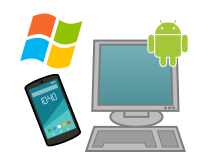 Write your ideas on the way on your Android phone, and finish the notes on your Windows PC at home. Or copy paste an article at home and share it with the computer at the office.

Write notes as you are used to

SilentNotes offers a WYSIWYG editor to format the text, there is no need to learn a special markup language to add formats like headers or lists. The editor works the same on all supported platforms.

Writing to-do lists is a comfortable way to keep track of your pending tasks. They are optimized for touch-screens and can be reordered. It is just like writing normal text, each new-line will start a new to-do item and the backspace key will remove empty items.

Each note can be provided with tags. All available tags are listed in the overview and can be used to filter the notes.

This tagging system acts like a directory structure, but it is more flexible, because one note can belong to as many tags as you like, not only to a single directory.

Start with opening the safe. The first time you can choose your own password. As long as the safe is open, all notes get a new lock-icon, which can be used to put a note into the safe or to remove it from there. More about encryption…

SilentNotes does not require an internet connection, the notes are stored locally on the device.

Synchronization with the cloud is done exclusively end-to-end encrypted. The notes can be self hosted with an online-storage of your choice, this allows synchronizing them between devices and offers an easy backup. Currently supported are the FTP protocol, the WebDav protocol, Dropbox, Google-Drive and One-Drive. See more… 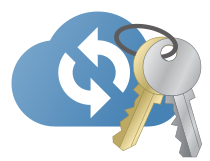 Just start typing letters into the search bar, to quickly find the right note. The notes are filtered continuous while you type.

There is also an in-note search, which can highlight all matching places.

The shopping mode will disable the editor and all buttons in the toolbar, so you can't accidentally make changes to the note. Only the checkboxes of a to-do list can be ticked anymore. This is especially useful, when you are working single-handed through a shopping list on your mobile phone. The shopping mode will also prevent the keyboard from popping up, so you have the whole screen for reading.

Whether it is a recipe in the kitchen or the shopping list in the supermarket, both are used over a longer period of time. To prevent Android from closing the app prematurely, a timer can be set in the notes view, which keeps the app open for a given time.

Each time the menu is pressed, the timer will be restarted with the specified time. You can change the duration of the timer in the settings.

The user interface can be switched to dark colors, this is pleasing to the eye when working in dark environment or for people with debility of sight. Devices with OLED displays can save energy in this mode.

This is a list of available shortcuts, to get your work done faster. Often the Return key triggers the OK button and the Esc key navigates backwards or cancels an action.

Whenever an application promises security and confidentiality, users just have to trust the developer team. Not only is it challenging to do encryption right, users are more and more accustomed to pay with their personal data, to benefit from new technologies. We believe that the best way to build trust is to publish the entire source code, this is why SilentNotes was turned into an open source project hosted at GitHub. There you can verify for yourself, what the application really does.

It is important to understand when your notes are protected and when they are stored in readable form. Whenever they leave your device for synchronization, they are encrypted with the transfer code. Notes placed in the safe are additionally encrypted with your own password. The automatic backup is deactivated on Android and on Windows.

Even the best encryption won't protect your notes, if an attacker/organisation was able to install a keylogger on your device. In this case they will be able to read anything you are typing, including your password.

Storage in the cloud

Because the Windows version of SilentNotes is now installed via Microsoft store instead of the standalone installer, it is not possible to access previously stored notes directly. The easiest way to load existing notes is to use an online storage:

SilentNotes does not collect personal data. Calls to the internet are done solely for proper operation of the software, or if explicitly specified by the user. No unnecessary privileges are required to start the application.